Shooting Gallery is pleased to present Toy Box, a solo show by Robert Xavier Burden. Join us for the opening reception Saturday, May 11, from 7-11pm. The exhibit will be open to the public for viewing through May 4, 2013.

Toy Box will consist of 16 oil paintings both on canvas and on panel, all of which place childhood icons into compositions of reverence and majesty. Backdrops that appear like ecclesiastical stained glass or elaborately woven rugs from afar reveal something different at closer view; characters once only at home in comics and cartoons are crossing over into the realms of oil portraits with the help of Burden’s imaginative eye and deft detailing.

But Burden isn’t simply a nostalgia merchant; his work deliberately re-imbues childhood icons with the magic they once possessed. Though Burden’s larger-than-life size representations of what are commonly mass-produced action figures naturally opens a dialogue on commodity fetishism, Burden’s pieces ultimately affect the viewer on a more visceral than conceptual level, with an honest evocation of the wonderment that children see radiating from their favorite toys. 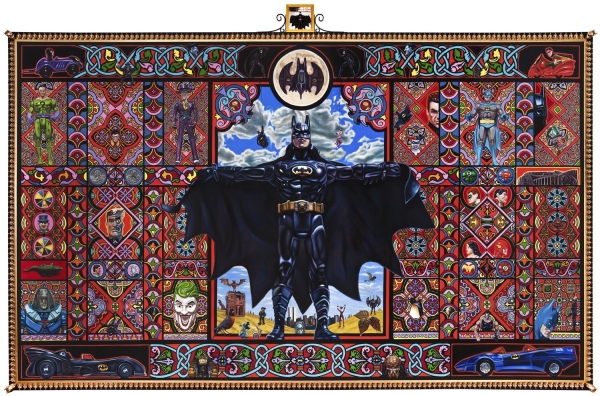 Robert Xavier Burden
The Holy Batman
Oil on Canvas, 95x146" Framed
Click to inquire for details.
(1 of 37) next